Rivals in West Side Story, Ariana DeBose and Paloma Garcia-Lee Are Best Friends in Real Life

The actresses met over 13 years ago in a New York dance class and danced side by side in Spielberg’s latest film.

Anita and Graziella were quite literally made to be enemies. Anita, played by Ariana DeBose in Steven Spielberg’s dazzling recent adaptation of West Side Story, is dating Bernardo, leader of the Sharks, a Puerto Rican gang. Graziella, played by Paloma Garcia-Lee, is “going steady” with Riff, the leader of the Jets, the Sharks’ rival gang. Simply through their romantic associations, Anita and Graziella are set up to be rivals.

Late in the movie, Graziella supports Anita in a way women characters confined to tropes like this are rarely allowed (more on that later—consider this a spoiler alert if you have yet to see the film). DeBose and Garcia-Lee’s off-screen friendship is testament to the importance of supportive relationships, especially ones formed in the unlikeliest of environments.

The two actresses, both 30, met about 13 years ago in a dance class at Steps on Broadway soon after they’d each moved to New York City from North Carolina. DeBose grew up in Raleigh, and Garcia-Lee, who’s from Pennsylvania, went to high school at the University of North Carolina School of the Arts in Winston-Salem.

Instantly, they hit it off. “We are very different performers, but we both approach the work with passion, intensity, and integrity that is instantly compatible,” says Garcia-Lee over Zoom from Los Angeles, with DeBose calling in from New York. “We both recognized we wanted to make big art, tell big stories and make an impact on the world in a very visible and important way.” 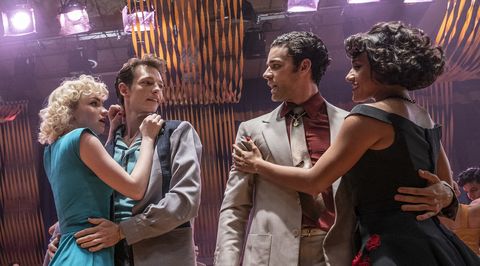 As peers on Broadway, they honed their dance skills together in class and while performing separately in the ensembles of a handful of Broadway shows. Garcia-Lee was in Phantom of the Opera, Nice Work If You Can Get It, On the Town, Natasha, Pierre & the Great Comet of 1812, Charlie and the Chocolate Factory, and most recently, Moulin Rouge! DeBose appeared in the choruses of Bring It On: The Musical, Motown the Musical, Pippin, and Hamilton (she played the dreaded Bullet).

Professional theater is a notoriously cutthroat industry—which means it’s not necessarily fertile soil for mutually supportive friendships like theirs. “When there’s so much talent in the room and so few parts, it can get competitive. There’s not a lot of female bonds and friendships of deep support that I have found in this industry,” Garcia-Lee says.

DeBose nods firmly in agreement and replies, “I think it’s rare, unfortunately, because there is an overwhelming sense that there’s only ‘one spot.’ It makes it hard for women to connect. Sometimes there are generational differences as well—nobody wants to feel like someone’s coming up and taking their gig,” she says.

Spielberg’s West Side Story posed a major opportunity for Broadway performers like DeBose and Garcia-Lee to make the transition to Hollywood roles. After West Side Story auditions, both DeBose and Garcia-Lee cryptically messaged each other about the film, coyly trying to figure out if the other had been cast, since they were both told to keep their roles a secret. It wasn’t until the movie was in production in 2019 that they fully celebrated the feat of their casting.

West Side Story marked both actresses’ debuts in major motion pictures. (DeBose actually filmed West Side Story before The Prom, a movie musical released on Netflix in 2020.) The casting was significant for their careers: It meant that people around the world would see their talent, not only audiences who ventured to New York City to their specific Broadway shows.

DeBose and Garcia-Lee say their bond positively affected the experience of filming—especially during one of West Side Story’s most intense and upsetting scenes. Near the end of the musical, Anita is cornered by members of the Jets at Doc’s store. They attempt to sexually assault Anita in retaliation for Bernardo killing their gang leader, Riff. “I was really glad she was in the scene because I needed a little support—put it that way,” DeBose says.

Ariana DeBose in West Side Story.

In the original 1961 film, no one rushes to save Anita during the harrowing sequence. But in Spielberg’s adaptation, three girls associated with the Jets—including Graziella—warn Anita to leave. Their cries are overpowered and ignored. As the Jets pin Anita down, the three girls futilely and furiously bang the window outside the store to try and stop the attack. It’s not until Valentina (Rita Moreno), Doc’s widow and a new character in West Side Story, comes up from the basement and intervenes that Anita is freed.

“It’s such a beautiful thing to see women fighting for each other,” says Garcia-Lee. DeBose adds, “I was really hoping [the scene] would make the final edit, and it did.” The fact that Garcia-Lee and DeBose are portraying characters on opposing sides of a turf war between Puerto Rican and white residents, unable to peacefully coexist in the same neighborhood—despite facing the same problems of gentrification and poverty—makes the scene that much more powerful. “That doesn’t mean I’m not going to stand up for you and fight for you,” DeBose says of why Graziella made the empowered decision to help Anita. “It’s not like they’re like arch nemeses,” Garcia-Lee says in response.

DeBose and Garcia-Lee’s favorite on-set moment came during rehearsals for “Dance at the Gym,” one of West Side Story’s big numbers, which, with its extravagant lifts and partnering sequences, showcases the dancers’ talent. “[That scene] felt like the culmination of both of our journeys, huffing it and pounding the pavement. Then, to walk into a dance studio with one of my best girls knowing that we were going on this epic journey felt really special,” DeBose says smiling. “I’m pretty sure I grabbed her hand and squeezed really hard, trying not to cry.”

“That week and a half was bliss,” adds Garcia-Lee of filming together. As Anita and Graziella, both characters and their boyfriends have a dance-off in the scene. “On set, we had this running joke. We were supposed to be mean to each other, but we were like, ‘I’m your biggest fan. I love your work.’”

From “Dance at the Gym” in West Side Story.

And that sentiment of support has been a theme throughout their friendship—especially as their careers have taken off. West Side Story was one of seven new movie musicals released in 2021, including The Prom and Hamilton, which DeBose also appeared in. As DeBose has made the transition from chorus member to leading lady in shows like A Bronx Tale and Summer: The Donna Summer Musical to now, the big screen, she says she’s been fortunate to have Garcia-Lee as her rock.

“On set, we had this running joke. We were supposed to be mean to each other, but we were like, ‘I’m your biggest fan. I love your work.’” —Paloma Garcia-Lee

“She’d say, ‘Go for it. Do not accept discounts. Keep pushing because if you are successful, then I will be successful. And if you can do it, that means there’s space for me.’ I’ve never forgotten that—because I’ll be honest, there was not a warm reception from members of my community when I did start saying that I wanted to try for more,” DeBose says.

Likewise, DeBose has always been Garcia-Lee’s biggest cheerleader, especially as Garcia-Lee looks to expand her opportunities from Broadway ensembles into originating roles on the small or silver screen. Before West Side Story, Garcia-Lee appeared in four episodes of Fosse/Verdon on FX. “Ari’s been there for me for everything. I seek help and strength in decisions that I’m making a lot of times when I’m trying to move forward or navigate career things, or when I’m making transitions in my own life. She’s the first to tell me, ‘Say no to this if it doesn’t align with you,’ or ‘Absolutely not. This is what you should be doing. You’re stronger than this,’” says Garcia-Lee.

And even when DeBose calls in the middle of the night, Garcia-Lee picks up. “That’s what friendship is. I feel like I’ve learned so much about friendship through this journey of two women who grew up together in this industry, now chasing their dreams on a new level. We’re committed to remaining supportive and grounding friends for each other.”

While competition is inherent to the entertainment industry, both women sense the audition room changing. They try to do their part by embodying what support can look like, and celebrating each other’s victories and accolades. “Now there’s a real sense that there is space for everyone and what makes you different is what makes you powerful and valid,” says DeBose. “The more inclusion, the more opportunity.”

Garcia-Lee sees DeBose both as a role model and a friend and is proud to have watched her manifest all those “big things” she dreamed about. “It’s the most uplifting thing when you have someone so close to you that shows you that it is possible,” says Garcia-Lee. “I’m emotional now.”